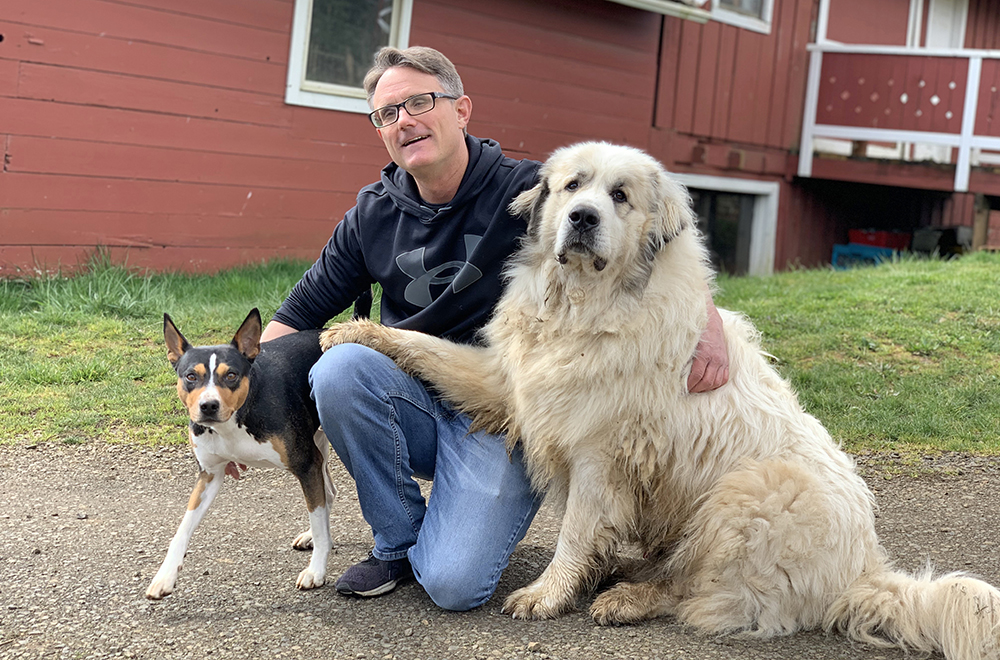 Home » News » Relief from the Pain of Addiction Found on Farm

It hasn’t been easy to secure a bed at Blanchet Farm in the past year. The need is high and staff has to be more cautious about letting people in because of COVID-19. Ryan, who’s been living at the farm since Sept., is one of the lucky ones.

Decades of alcohol and drug abuse with bouts of homelessness, jails, rehabs, and relapses led Ryan to a cheap motel room in Salem. He used the money he had won from video poker to pay for the room along with a pile of drugs. All alone, using until he hurt, he was certain that he was going to die there. He’d already visited an emergency room because of kidney failure and he was sure that his heart was going to cease working.

But he couldn’t stop using.

“We addicts break a lot of hearts. I’ve missed so many things in life because of my addiction. I lost my friends. Like my real friends. I got super involved in crime,” Ryan recalls. “I broke my parents’ hearts.”

Men who find their way to the farm are often in a hopeless state. Even when faced with negative consequences, the chemically dependent brain is consumed by the goal of getting more drugs or alcohol.

“If I were using I wouldn’t be communicating with you right now. I probably couldn’t talk. I’d be super paranoid. I would probably have my fists clenched. And I’d look like a really scary person.”

“The drug becomes most important. Like, I literally would get $60 in my pocket and go use again,” Ryan recalls. “If I were using I wouldn’t be communicating with you right now. I probably couldn’t talk. I’d be super paranoid. I would probably have my fists clenched. And I’d look like a really scary person.”

It all began, when Ryan landed a well-paying high-pressure job at a tech company just out of business school. He lived with friends and his family was nearby. Within a year Ryan was unemployed, addicted to meth, and living on the streets in Orange County, CA.

“Me using usually looks like me getting arrested, maybe resisting arrest because I think they want to hurt me, then they take me to the hospital, stabilize, and then I go to jail,” Ryan says.

This cycle continued for years and exhausted everyone in his life. His parents eventually moved to Oregon and asked if he wanted to come to escape the environment he was in. So, he did.

“You know, they say that your addiction always follows you,” Ryan says. “I’m living with my parents. Staying sober. And then next thing I’m down at the river using with people I never met in my life.”

A friend he met in an Alcoholics Anonymous meeting told him about the farm. He remembered it when he was waiting for death in that hotel room. 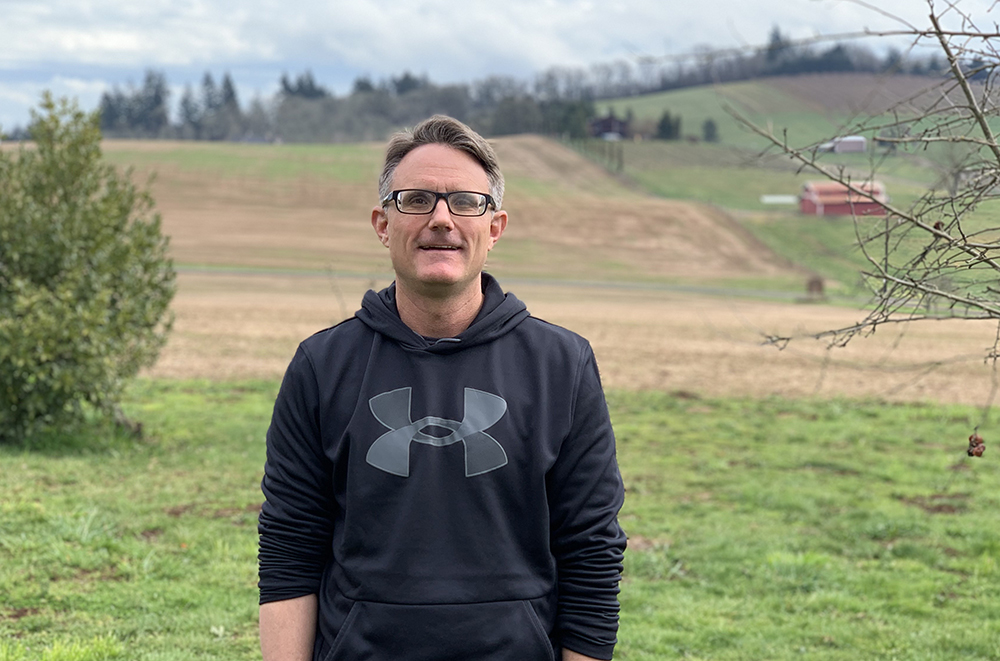 Ryan standing in a peaceful field at Blanchet Farm. Photo by Julie Showers.

There was a waitlist, so he called every Tuesday for nearly two months until a bed opened. One day his phone rang, it was Debra, the Case Manager at the farm. There was a spot for him but he would first need to go to detox.

Bridgeway Detox in Salem, who had helped in the past sent an ambulance. He flushed his bag of drugs down the toilet and left the hotel for detox.

When he arrived at the farm Ryan was greeted by Miko, a large barking Pyrenees dog who can be intimidating to those who haven’t met him. But Miko put Ryan at ease right away.

“Miko is my best friend now. It’s just like a super connection for me and very therapeutic,” he says. “When I arrived, Ross [Farm Manager] said, ‘there’s no hurry, we’re on farm time.”

Research shows that a compassionate approach to helping people recover is more effective than punishment. Showing empathy over anger gets a better response from people in the grip of addiction. The farm offers empathy, accountability, and a place to heal.

“It’s like you can breathe here, you know what I mean?” Ryan says. “There’s been a few mornings where I’m crying here. I’m just so thankful. I just want to say thanks to the donors.”

In Ryan’s experience, fear has never been enough to stay sober.

“They talk about being spiritually bankrupt. I mean, literally, I can recall a time when I’m in a sleeping bag and homeless knowing my dad is dying of cancer. I was literally hopeless,” he says.

Ryan believes the addiction recovery farm is a once-in-a-lifetime opportunity. Now rested and sober he’s getting his driver’s license back, working a part-time job at a farm down the road, and continuing his studies to become a certified Peer Support Specialist. Last Thanksgiving, his family invited him to dinner. He got to spend time with his dad who is sick.

“I think my parents haven’t given up on me. I like to believe that I’m going to make it,” he says.

Blanchet Farm is a free program because of compassionate people like you. Give someone the chance to live without the pain of addiction by supporting the farm with a donation. Thank you. 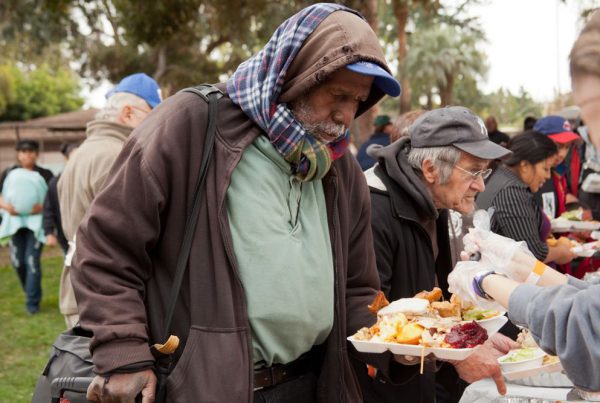 Big Hearts Plus Food Safety Needed to Feed the Houseless 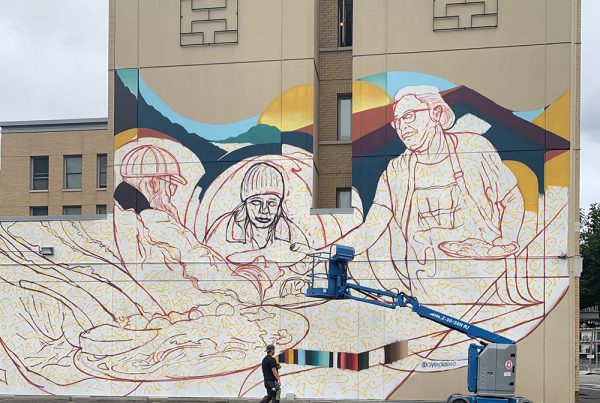 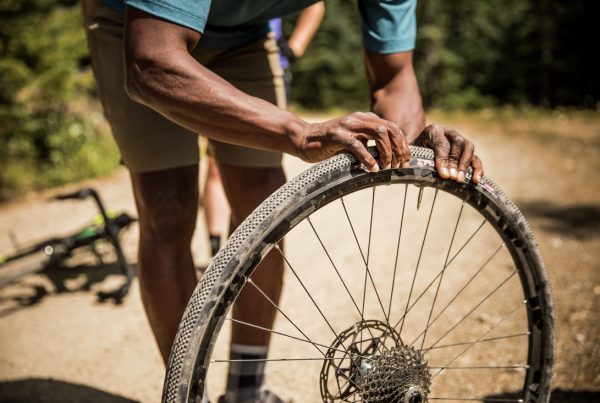