To offer food, shelter and aid to all those in need of a safe place to be nourished and restored. Assist the transformation of each life we touch with compassion and dignity.

Hospitality  We welcome everyone into our home with kindness and compassion.
Dignity  We respect the inherent value of everyone inside and outside our organization.
Hope  We foster optimism and the belief that good things can happen when we work together.
Integrity  We are honest, reliable, and trustworthy.
Community  We build relationships and strive toward common goals.
Authenticity  We honor everyone’s right to be their unique self.

Blanchet (pronounced Blan-shāy) House is a nonprofit social services organization located in downtown Portland.  We provide food, clothing, and housing programs to people in need.  We believe it is our responsibility to offer assistance in whatever way we can.

In 1952, Blanchet House was founded by a group of University of Portland students as a “house of hospitality” in the model of those established by the Catholic Worker Movement.  Although we are not affiliated with any religious organization, our founders are rooted in the Catholic community. Our mission derives from Catholic social teaching principles, including honoring the dignity of every person, offering aid to the poor and vulnerable, and solidarity.  Our board and staff include persons of various faiths, and we do not proselytize to our clients or guests.

Meal Program
We serve breakfast, lunch, and dinner six days a week in our Founders Cafe. Our nutritious meals are compassionately served to our guests by volunteers. All are welcome to enjoy meals here. No questions asked. Thanks to generous financial and food donors we were able to provide more than 500,000 meals to people without reliable access to food last year.

Clothing Program
New and gently used adult-sized clothing is donated by individuals and businesses. We sort the clothing with help from volunteers and make it available to our guests during meal services. 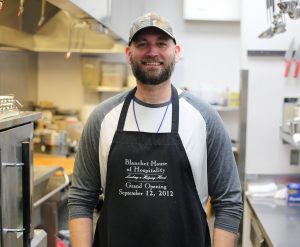 Residential Programs
We operate two transitional shelter programs for men struggling with addiction, unemployment, mental health, and other challenges. Blanchet House and Blanchet Farm are life renewal work programs in which all residents are required to contribute to the community by fulfilling essential roles in our operations. The guests living in the Blanchet House program in downtown Portland work in the Founders Cafe preparing and serving food for the public. The men living in the Blanchet Farm program in Carlton, Oregon maintain the 62-acre farm, including animal husbandry, gardening, and woodworking.

Blanchet House’s three-year strategic plan was created through an inclusive process involving the Board of Directors, guests served, volunteers, community partners and staff. The goals and strategies reflect an integrated approach to fulfilling our mission as Blanchet House moves forward and continues to meet the needs of many. 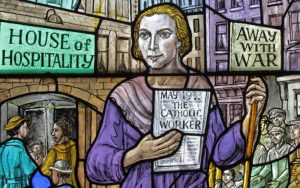 Motivated by the teachings of the Catholic Workers Movement, the club set out to offer food, clothing, and financial aid to those in need. The members of the Blanchet Club went on to attend the University of Portland together.

World War II brought a temporary halt to the club’s social service. At the end of WWII, the Blanchet Club regrouped and welcomed new members to join them in service. Together they again began to find ways to help the needy in their community. 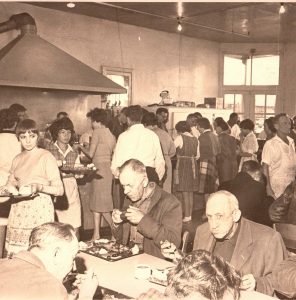 Under the direction of Fr. Francis Kennard, the now eight Blanchet Club members searched for a permanent location in Portland to carry out their mission and make a larger impact.

At the corner of NW 4th Avenue and NW Glisan, they found their building and went to work preparing it for guests. The three-story building was currently be used as a brothel. The group rented the ground floor for their mission. Once they paid their first month’s rent of $35 they were ready to open their doors to the public. On February 11, 1952, they offered their first free hot meal. A simple offering of beans, bread, butter, and coffee. 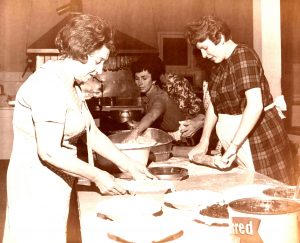 By 1958, the group had raised money to purchase the entire building outright for $25,000. The building would now be called the Blanchet House of Hospitality. 340 NW Glisan, which still stands, had a small basement for storage, the main floor which contained the public dining room, kitchen, manager’s office, and bathrooms. The founders and their families cleaned up the upper floors to use as short-term housing units for men who, in exchange for room and board, would work in the kitchen and help serve. 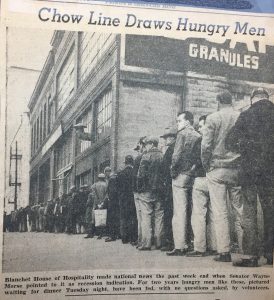 Now 10 years after opening, the Blanchet House had increased the number of meals it could serve and the breadth of services it could provide thanks impart to the addition of full-time Executive Director, Al Riley, who served for 38 years.

Blanchet House had become an important institution in the social fabric of Portland. Word on the street spread to those in need.

Blanchet Farm
The founders learned that there was a need for a place outside of Portland where men struggling with addiction could escape the temptations of the city. They raised money to purchase a 40-

acre prune farm in Yamhill County. Over the years, with additional land purchases and land gifts the farm has increased to 62 acres. They built dormitories, public space, barns for animals and a woodshop. There is now room for 22 men to live within a program designed to facilitate recovery from alcohol and drug addiction. 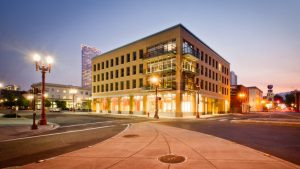 After nearly 10 years of planning and fundraising, all the while serving those in need, the Blanchet House board was able to build and open a new building. LEED platinum certified, the new and improved Blanchet House increased our capacity to feed and house those in need. We feed nearly 1,000 people a day and house up to 50 men.

We have served over 16 million meals to those in need and transitioned 10,000 men back into society. Blanchet House is recognized as being an exceptional model for providing holistic pathways from homelessness to lasting self-sufficiency. We serve all people with dignity, compassion, and without judgment.

Look What We Found

Blanchet House co-founder, Jim O’Hanlon Sr., discovered this vintage coin collection can in his basement. In the 1960s, Blanchet House staff put these cans in Portland area bars to raise money to feed and house those in need. It’s hard to believe that Blanchet House has been solely funded by individual donations since 1952. We receive no government or archdiocese funding. A small contribution goes a long way at Blanchet House of Hospitality.