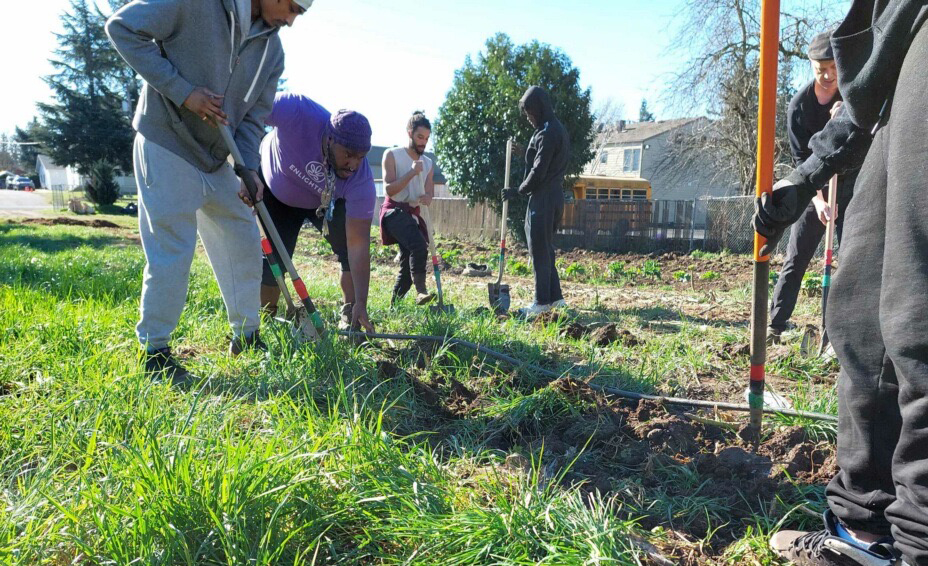 As a nonbinary person, Bear is building a new, authentic life for themself with a dream to start a black-owned inclusive farm to help others heal.

Bear Necessity (they/them), 33, identifies as gender fluid or non-binary. For those who may not know what that means, it describes a person who is exploring their gender or does not identify as solely male or female.

This is only one of the qualities that makes Bear a unique resident of Blanchet House’s men’s transitional housing program.

For the purpose of living at Blanchet House, Bear identifies as male. The program gives Bear an opportunity to have a stable, safe, and supportive place to live for the first time in their life. 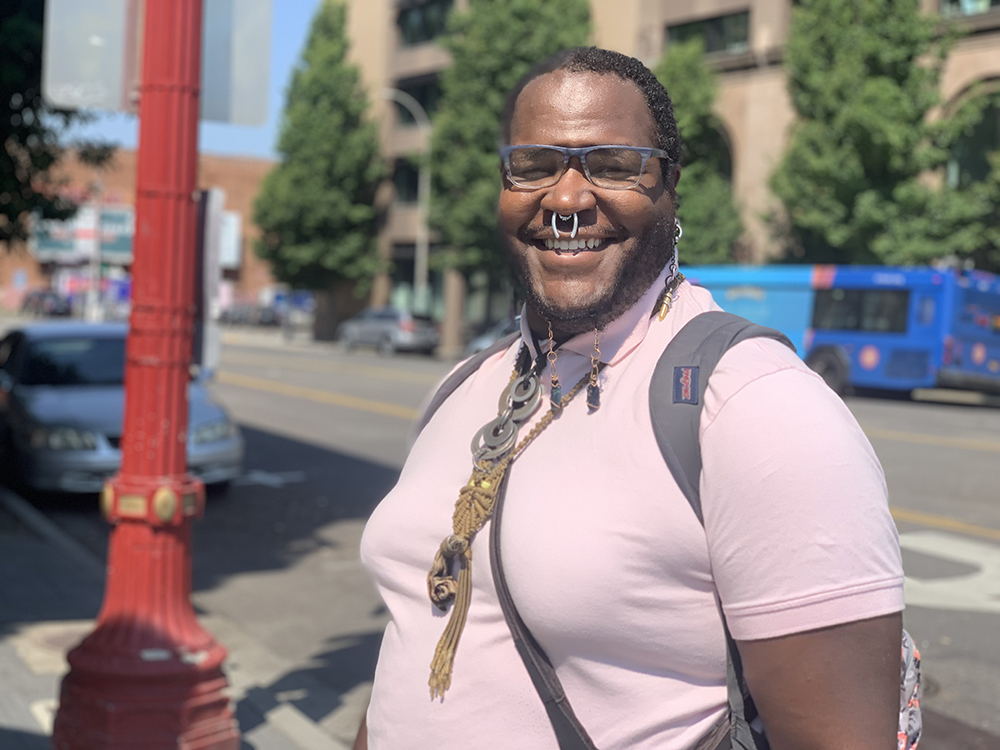 “I’ve been homeless since I was about 16,” Bear says. “I have been in and out of other people’s houses. This is the longest time I’ve lived anywhere since I was 16.”

Born in Baltimore and raised in Philadelphia, Bear endured physical and emotional abuse. They’ve also been the victim of human trafficking.

Outside of Blanchet House, Bear freely expresses their gender fluidity freely with the usage of all pronouns and clothing.

“I don’t like to hold placements that society deems as a part of marketing and arguing points,” Bear says. “I experience this being as alive, and I don’t really want to tell it what life looks like.”

Blanchet House’s gender-based program benefits many participants by eliminating the opportunity for distracting romantic relationships that can harm someone in addiction recovery.

“Gender-based programs can benefit women who have suffered a lot of trauma involved in their time abusing substances. Many do not feel safe living with men,” says Kristi Katzke, a Case Manager at Blanchet House who works with Bear.

A Future in Farming

Bear aspires to run a farm one day where they can build an inclusive community of people and offer safety for children of all backgrounds. They dream of having a place where kids excluded from their families because of their gender or sexual identity can find a home.

Bear teaches a group of young people the basics of farming at a community garden in Gresham, Oregon.

“I want to adopt in queer kids who get kicked out of their houses. 18-year-olds who age out of the foster care system into homelessness,” Bear says of his dream to open an inclusive farm. “A place for homeless youth who want to learn about agriculture. Having a farm, being on land, being able to farm for the rest of my life is the pie in the sky.”

Bear explains that they learned how to forage food from garbage cans and yards when they were experiencing homelessness. This gave Bear a perspective on the need to be self-sufficient which they believe can be created on a communal farm.

“I tried to homestead [in Oregon],” Bear laughs while recalling. “People with guns are very scary. Don’t do that.”

Currently, as the farm manager with a local nonprofit farm in the Portland area, Bear is responsible for the planning of growing crops and teaching low-income members of the community how to raise food. This position has given Bear more insight into how they can work toward their dream of starting a nonbinary black-owned inclusive farm. 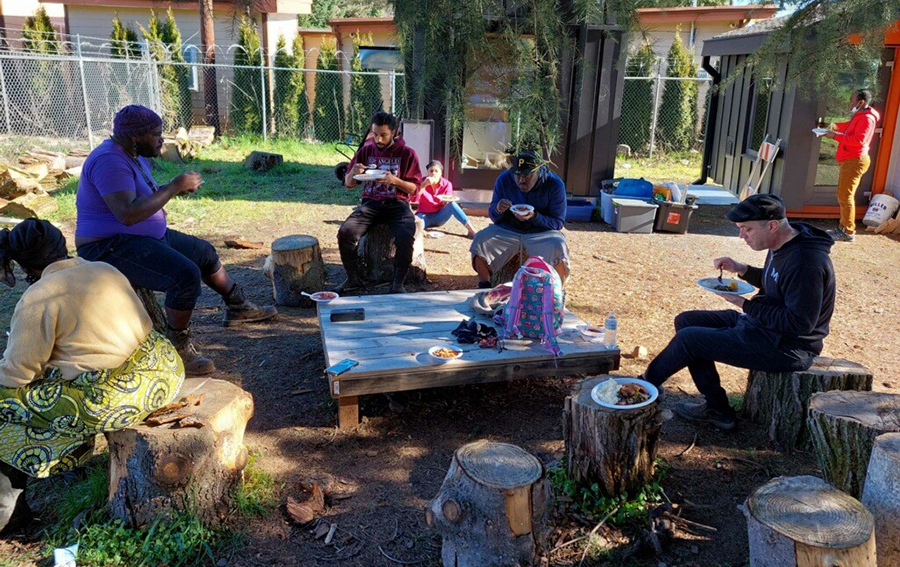 Bear enjoying a meal with others after a day of work at a community farm.

On the surface, with their piercings and colorful nonbinary clothing, Bear may seem like a complicated individual to some people. But on the contrary, Bear is full of love for others and the world. They’re surprisingly open for someone who has endured so much trauma in life.

“As long as you approach me with love, I don’t really care what you call me, because it’s the energetic response that we’re giving one another rather than what it is that you see,” Bear says. “That is the comfort of being in a place where you are given a new type of love that isn’t required for you to earn it.”

CJ Smith is an intern at Blanchet House and a student at the University of Portland. 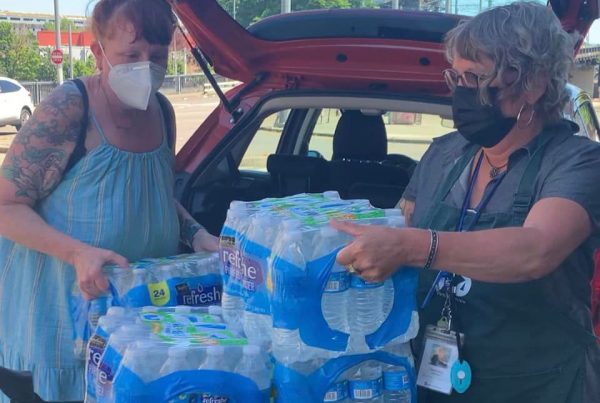 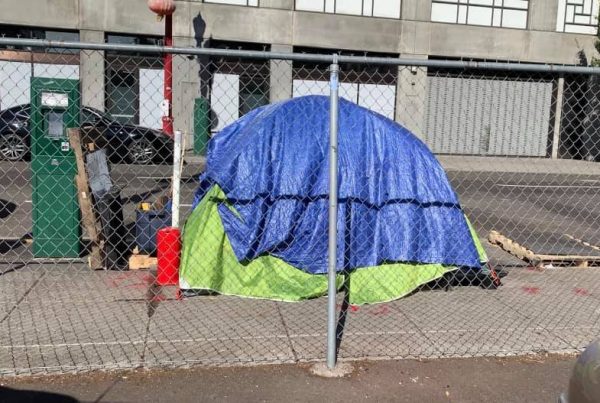 5 Ways To Help the Homeless