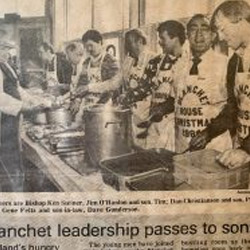 Some of the original founders of the Blanchet House and their sons teamed up this holiday season to serve the traditional Christmas dinner to Portland’s homeless and hungry.

Portland lawyer James O’Hanlon and stockbroker Dan Christianson–among the original founders 32 years ago when they were enrolled at the University of Portland–were assisted in feeding the hungry by their sons Tim O’Hanlon and Peter Christianson, both students.

Attorney Eugene Feltz was accompanied by his son-in-law, Dave Gunderson.

The young men have joined their fathers on the Blanchet House board of directors.

With 2,000 pounds of donated turkey and all the trimmings. About 700 people were served.

“We don’t want to see this end,” said Dave Gunderson. “As long as there are people who are hungry, we want to get them fed.”