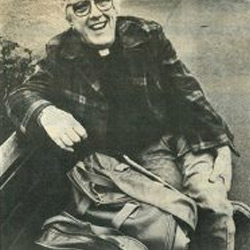 Father Francis “Frank” Kennard inspired by Dorothy Day and the Catholic Worker movement to “stand up for the poor” became the advisor and chaplain to the Blanchet Club at the University of Portland in 1948. The young men of Blanchet Club were motivated by Fr. Kennard to “get out in the streets and do something meaningful. Help people!” After years of service small acts of charity, the nine members of Blanchet Club searched for a permanent location to carry out their mission to feed, clothe, and offer aid to those in need.

“He believed in the dignity of everybody we served, even if they abused it,” said Gene Feltz, remembering Father Kennard in a Catholic Sentinal article. The priest, who died in 1994, eventually became a missionary in South America and returned to Portland, where he lived in Old Town and ministered to homeless people.

Photo courtesy of the Catholic Sentinel.