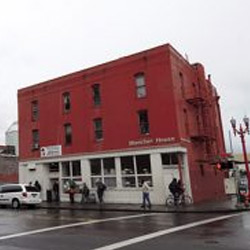 2001 - Planning for a New Building Begins

Erected in 1911, the Blanchet House, a free-standing masonry building was no longer liveable. It was not economically feasible to repair the old building so the board began an ambitious 10-year campaign to raise money to build a new Blanchet House next door. Finally, in 2009, Blanchet House reached an agreement with the City of Portland to construct a new building on city-owned land at the corner of NW Third and Glisan. The new 36,500-sf, the four-story building would triple Blanchet’s space, increasing the residential capacity from 28 to 60 people. Blanchet House would be able to significantly help more people in need of housing and meals.

“The building has served us well, but it’s reached the end of its use and it’s nearly 100 years old,” said Dan Petrusich, son of an early board member and now a board member himself. “There’s something very special about this place. Our challenge will be to replicate that feeling in the new building.”

Read more about construction of the new Blanchet House