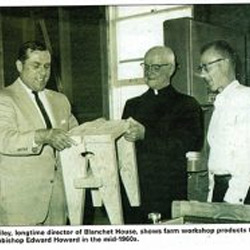 10 years after opening, the Blanchet House of Hospitality had increased the number of meals it could serve and the breadth of services it could provide thanks impart to the addition of full-time Executive Director, Al Riley, who served for 38 years starting in 1960. Al answered a classified ad for a house manager and worked for free. The ad read ‘Apostolic work. Director needed for Blanchet House seven days a week, 17 hours a day. No pay.’

Agreeing to try out the job for a year, he became a fixture at Blanchet House, as well as a friend to thousands of needy people. He personally wrote all of the newsletters and mailed out an annual appeal on a half-sheet of paper. Funds came from individuals, businesses, bequests, and foundations.

“He had a way of calming the waters in people,” said Jim O’Hanlon, a founding member of Blanchet House. “It was his love for people that enabled him to do his job so well.”

After a decade of service, Blanchet House had become an important institution in the social fabric of Portland. Word on the street always spread to those in need. 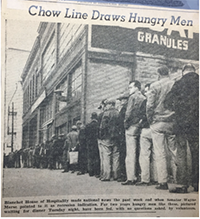