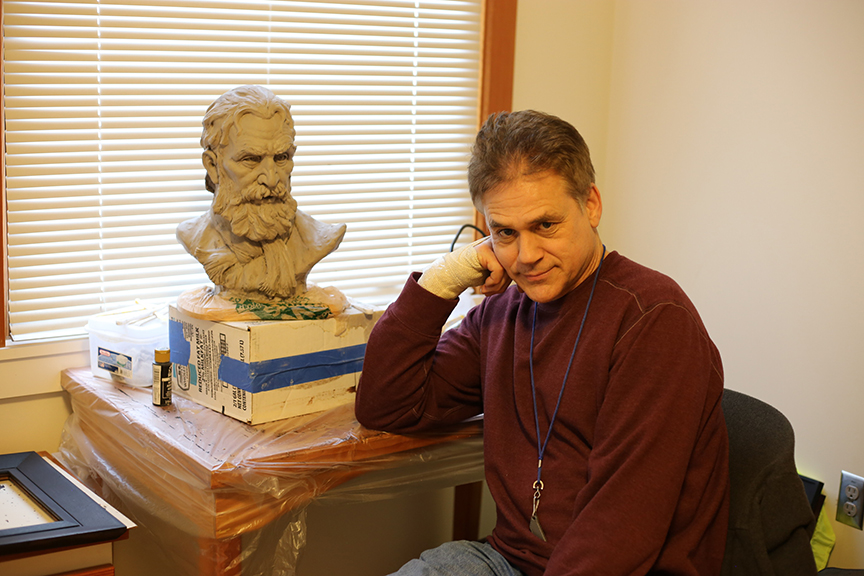 Art and Recovery: Artist Richard Lithgow poses next to a sculpture he made while staying at Blanchet House.

When Richard Lithgow was young, his mother told him a story that bewitched him. He’s been using paint and clay to process it ever since.

In the story, Richard’s mother described a homeless man she saw, shoeless, with unkempt hair and a long beard, paying for a stack of philosophy books with “the little cash he had.”

“I had this romantic notion that all homeless people were geniuses gone mad,” Richard says. “I’ve been painting him ever since.”

For much of his life, Richard, whose father was an alcoholic, has been drawn to painting “homeless drunks.”

“When I was younger and painting these homeless men my mentor said, ‘You are going to end up like these guys, it is a self-fulfilling prophecy.’” 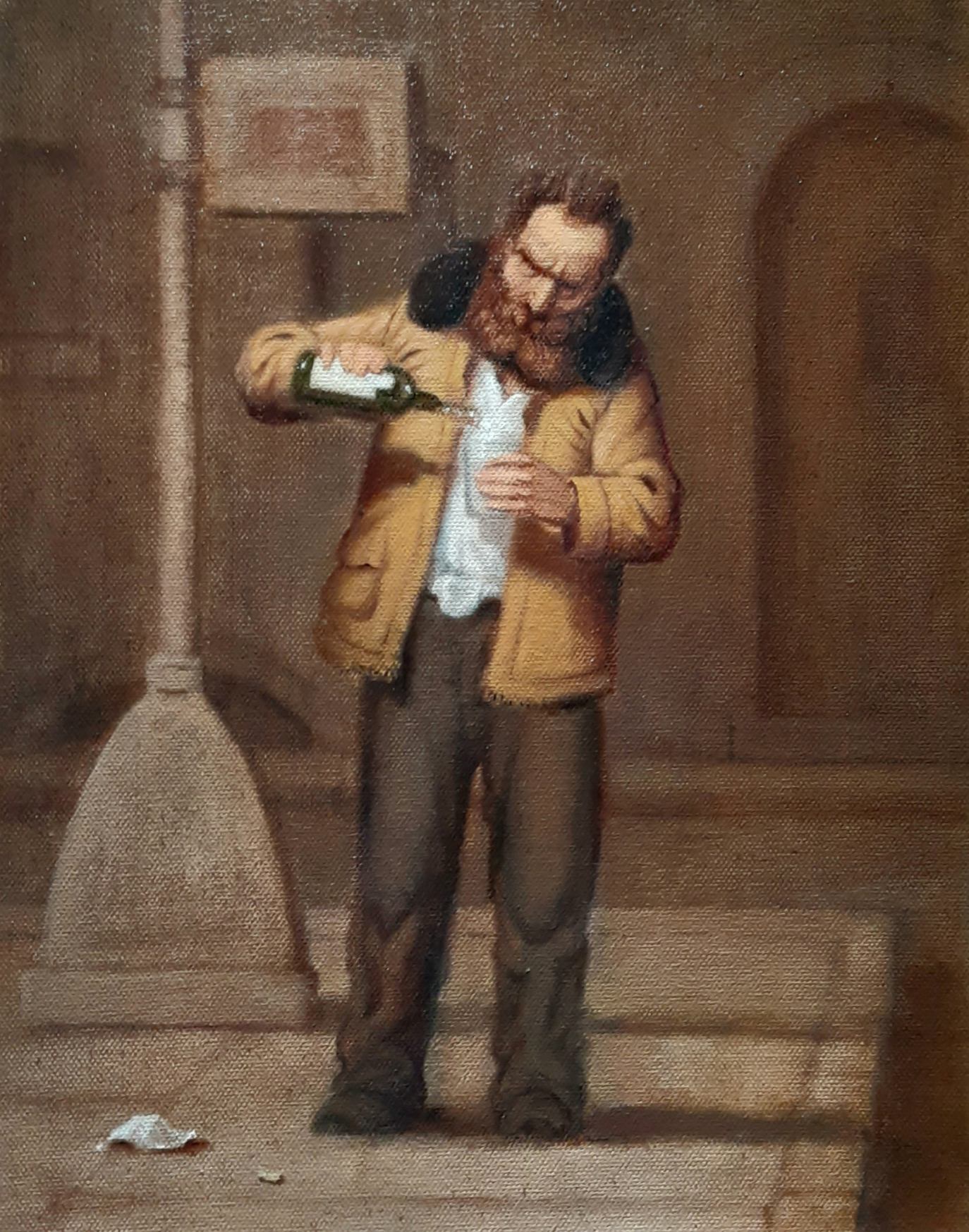 Lithgow’s painting of the homeless alcoholic man he’s been thinking about since his youth.

At 57, he now has a large collection of paintings of the homeless man his mother described—along with other subjects including wildlife, landscapes, and people he’s known. His style is rooted in realism. Foregoing abstraction, he paints his subjects with startling truth and in fine detail. All with a sense of humor.

Years ago, Richard’s paintings found some fame. They hung in galleries around the country and the actor Carrie Fisher even purchased his work. Then he hit rock bottom. His productivity was halted by alcoholism.

“I would drink for a week and be a drunk, then I would sober up to paint. Sell a painting, then get drunk,” he says.

This went on for years.

Now, he’s returned to his canvases at Blanchet House after stopping drinking. 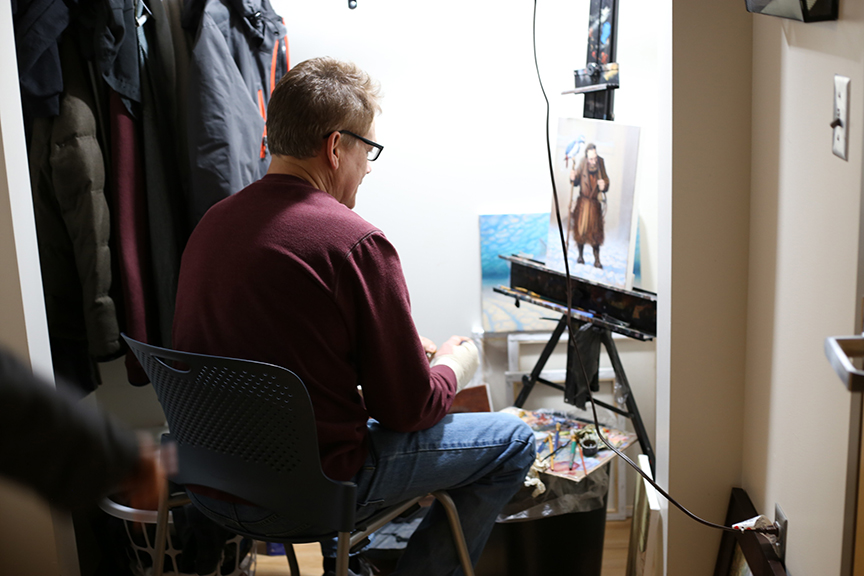 From a closet he converted into a studio in his small 400-square foot room at Blanchet House, which he shares with one other man, Richard has been creating collections of paintings that he hopes to start selling in galleries. He first began painting when he was a junior in high school in Long Island. Also a talented wrestler, he won a scholarship to Cornell University. But after one semester, he decided to quit in order to teach himself how to paint.

“I wanted to live in the country and send my paintings to the galleries,” he says.

For three years he lived in New York City, successfully selling his art at outdoor shows around the state. But drinking began to make painting and paying rent difficult. He was around the age of 23 when he began drinking. 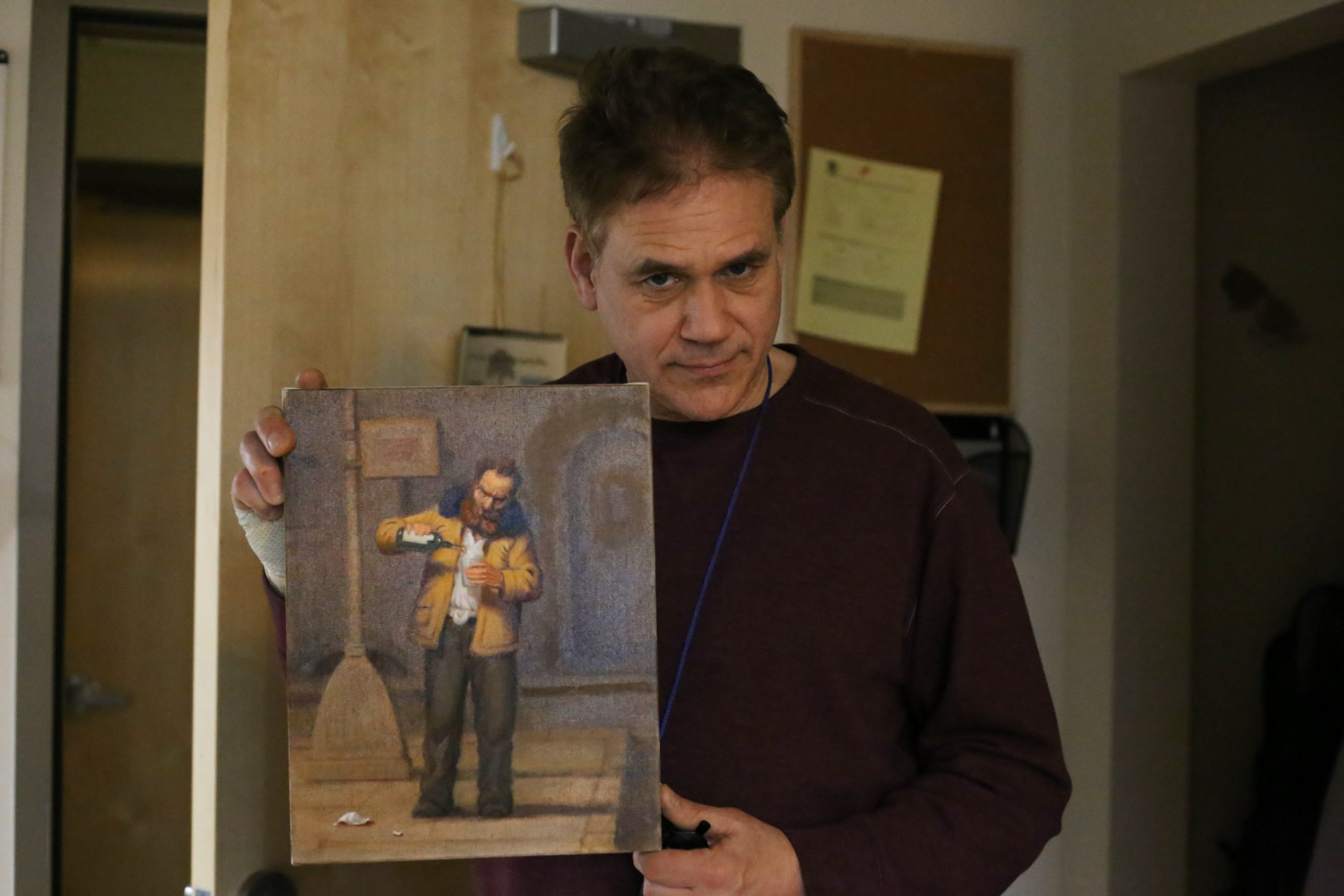 Artist Richard Lithgow poses with a recent painting he made at Blanchet House. 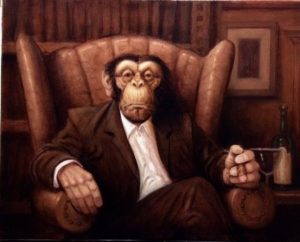 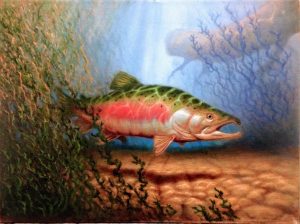 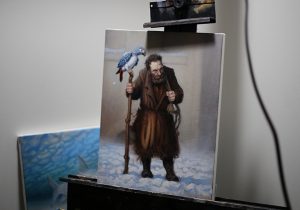 “When I was younger and painting these homeless men my mentor said, ‘You are going to end up like these guys, it is a self-fulfilling prophecy,’” Richard says. “I was like ‘What are you talking about, I don’t even drink?’ And I didn’t at the time. I can’t believe how close I became to being homeless.”

Eventually, Richard moved to the west coast to be with his family and to get sober. He met his first wife, had two daughters and sold paintings while his wife operated a furniture store. He was doing well for himself, selling his art for anywhere from $2,000 to $7,000 apiece. Then he says, “It just stopped. I started drinking again.”

He garnered some attention for a series of paintings he made satirizing Thomas Kinkade’s popular work. He turned Kinkade’s idyllic “Silent Night” into a horror scene with a monster snowman haunting a man drinking in the snow. RIchard sold the original when he was living in Los Angeles. His success didn’t last long because of his drinking. 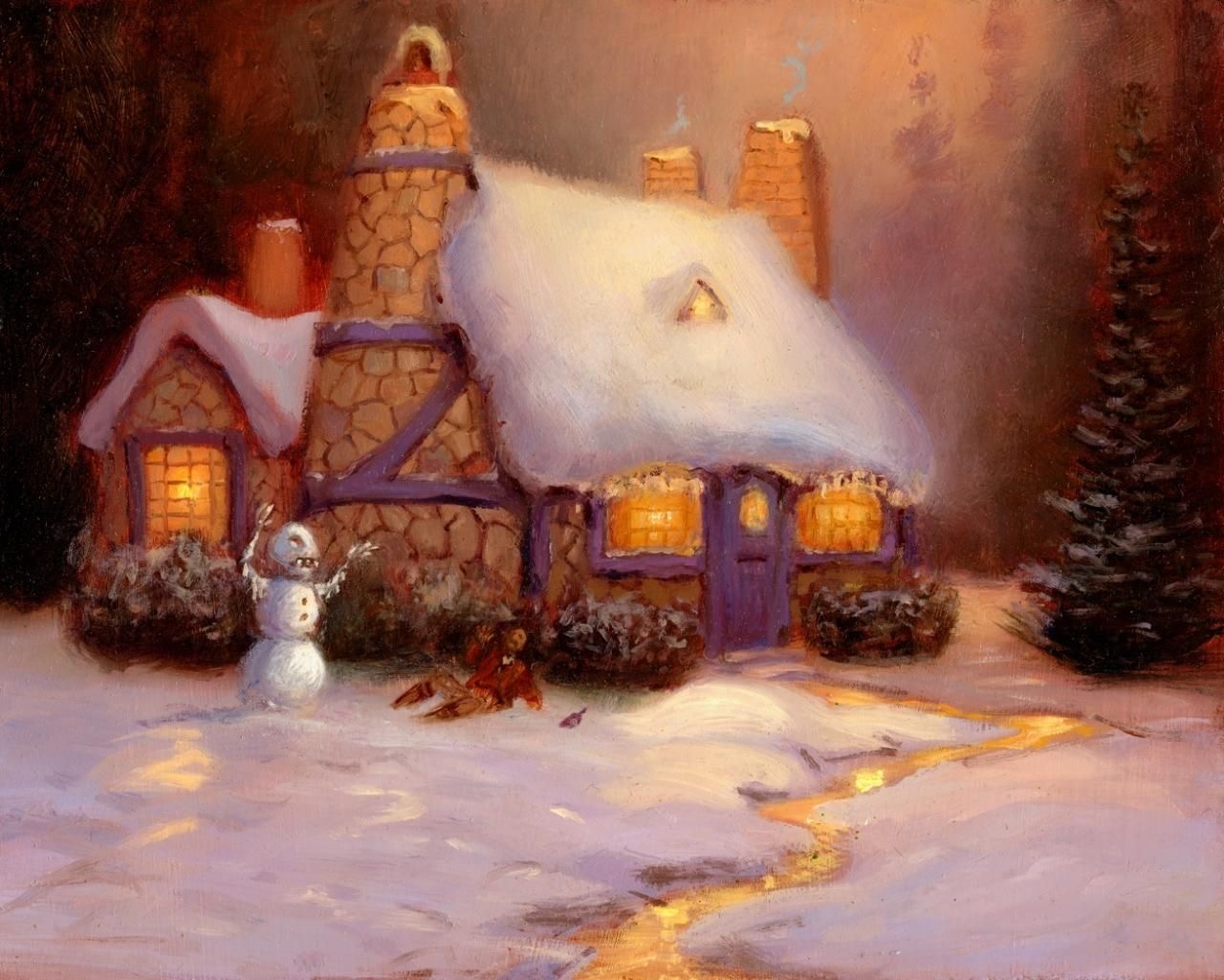 “I liked drinking because it numbed what I was feeling,” he says. “But then it always ends up making you feel worse.”

He moved to Oregon, married, painted on and off, and worked briefly as a sign spinner for Mattress World. When he was drinking, his painting suffered, as did his relationships with his wife and children.

“The longest I was sober was for 12 years. I stopped going to [Alcoholics Anonymous] meetings, I slacked off, then picked up drinking again,” he says. “My spiritual life just died. I started living in resentment.”

Things changed after Richard spent time at De Paul Treatment Center and moved into the Blanchet House. His art and recovery are flourishing.

Evidence of his creativity abounds in his room. In only two months at Blanchet House and he’s painted numerous portraits and a life-size bust made entirely out of air-drying clay (he’s also a self-taught sculptor). Most of the works focus on the homeless man he romanticized from an early age.

Richard’s work is vibrant and startlingly realistic, while poetic in its softness and in its subject matter. His muses—be they pouring a drink, or traversing over a snowy tundra with a knobby walking stick—are imbued with the tenderness of humanity. 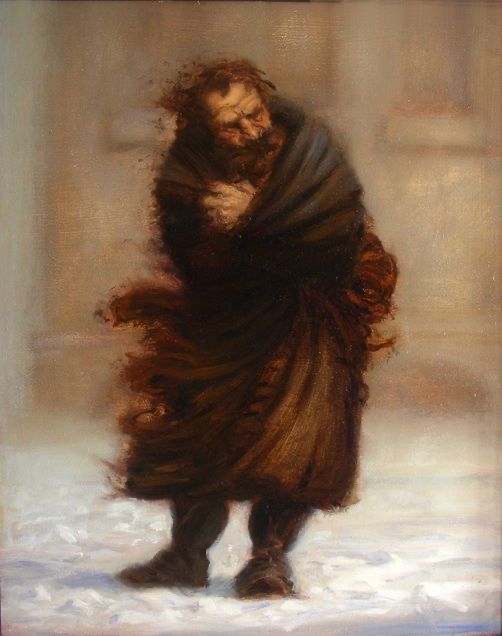 Richard’s goal is to get his work back in galleries.

“I’m going to start painting for a gallery again,” Richard says. “I live to paint.”

At the Blanchet House, he says he has freedom and accountability, which allows him to focus on the work he loves most.

“They hold me accountable here,” he says. “If I relapsed, I know I would be on the receiving line of the food. I would be coming back for breakfast, not to serve it.” 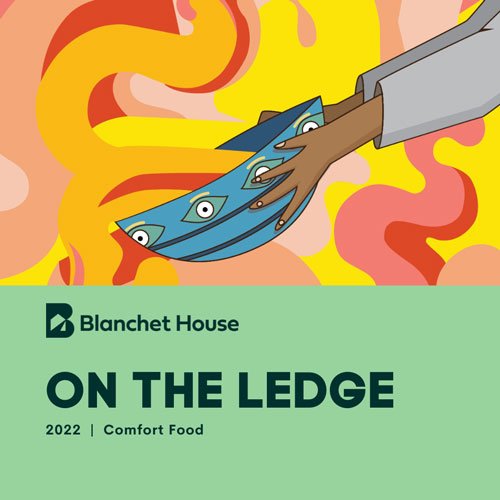 On the Ledge Art Show

Blanchet House’s On the Ledge art show is a unique annual art show focused on local artists and helping people experiencing homelessness in Portland. It’s an opportunity to purchase limited edition prints from mostly local artists. In addition, the show helps introduce the mission of Blanchet House to a new audience. Mostly, people looking for ways to support the houseless community in Portland.

We make a difference, one relationship at a time, through food, clothing, and supportive housing programs.

We welcome and serve meals to everyone with compassion and dignity. Join as a guest, a volunteer, a resident, a donor, or a supporter.

There are many people in immediate need of food, clothing, access to hygiene, shelter, community, and hope.

Your gift will help stabilize lives by providing meals, transitional housing, and other vital services to vulnerable individuals and families.