Mary Grace McDermott, age 88, isn’t listed on the wall of founders at Blanchet House of Hospitality, but her service in the early days of the organization helped make it what it is today. She met the young men who started the Blanchet House mission while attending the University of Portland as a nursing student. In 1952, only a few weeks into opening the dining room doors, the demand for their free meals was so great that they called on classmates to come help. Mary Grace answered the call.

“The boys needed help! They were so pathetic, and begging, saying, ‘we just can’t manage it. There are so many people down there!’” she says with a sweet laugh.

Mary Grace is a very humble woman so it took quite a bit of coaxing to get her to talk about her generous service to the community. 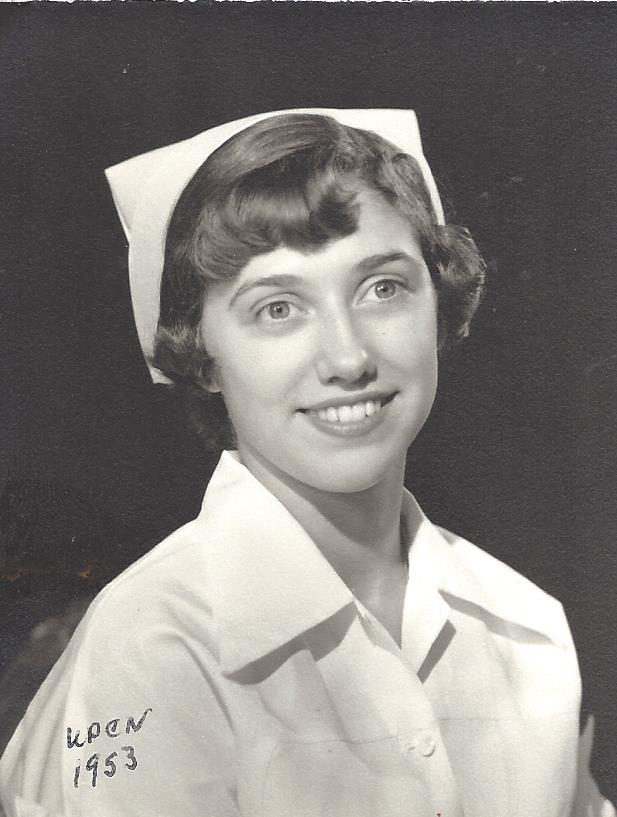 Despite going to school full-time and getting clinic hours at Legacy Good Samaritan Hospital for her nursing degree, Mary Grace found time to serve breakfast at Blanchet House every week.

“We would run down from 23rd and Westover to serve breakfast at 5:30 in the morning until 6:30,” Mary Grace said. “We had no cars in those days, and I don’t know where the buses were, but they weren’t running that early! So, we would literally run down to Blanchet House and then at 6:30, whether they were done needing our help or not, we’d have to run back to the hospital, change into our uniforms, and be on duty at 7!”

“Everything I was normally asked to do was always highly polished and clean, womanly things, and all of a sudden ‘We need help feeding the poor in Skid Row!’ so I thought, let’s go!”

Mary Grace and her nursing friends served at Blanchet House on and off for years.

When asked what drove Mary Grace to help, she says, “Everything I was normally asked to do was always highly polished and clean, womanly things, and all of a sudden ‘We need help feeding the poor in Skid Row!’ so I thought, let’s go!” 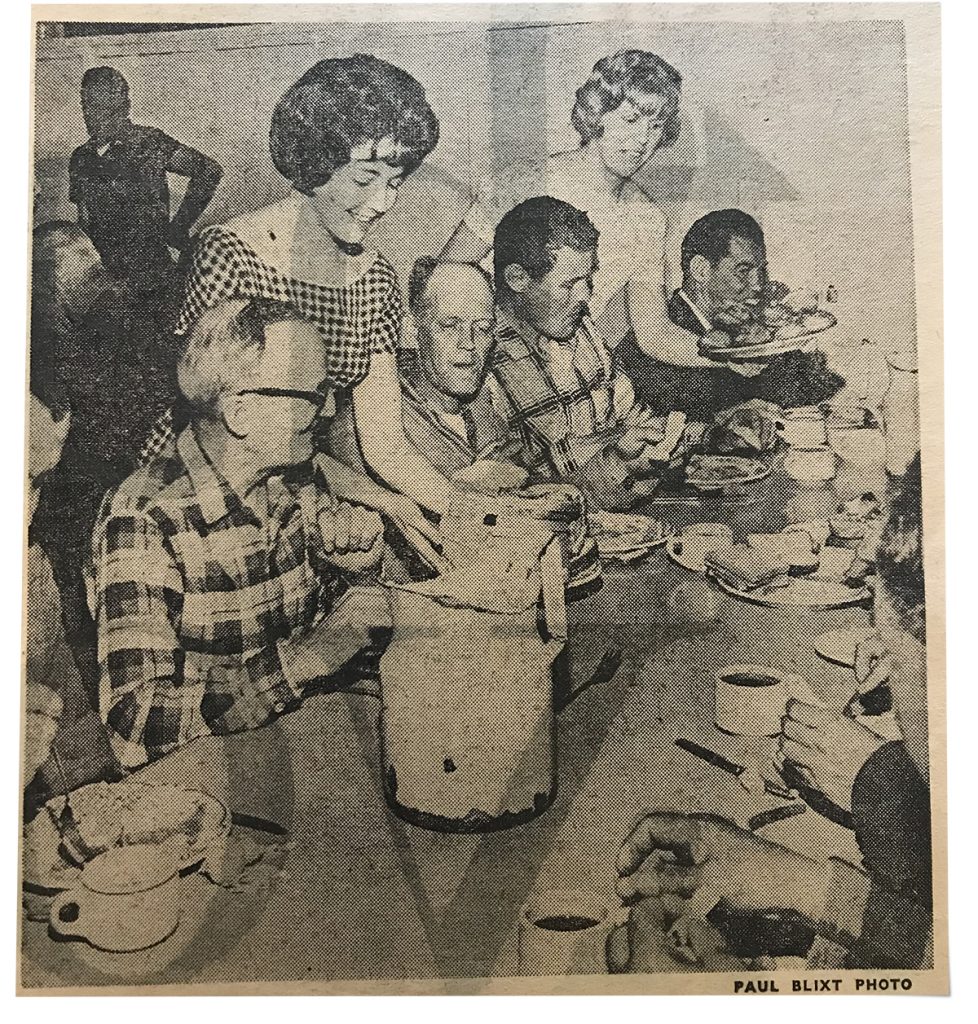 Mary Grace has lived an unconventional life by her generation’s standards. After graduating from UP, she moved by herself to New Orleans to work in a leprosy clinic while earning her Master’s in Nursing.

“Someplace along the line, I was out in California. I was traveling by myself, nobody else cared to do all that travel,” Mary Grace recounted.

She spent a few years working at a free clinic in San Francisco seeing 2,000 patients a month. She spent a year in the PeaceCorps, “down at the bottom of Costa Rica.” She went to Guatemala. She climbed Machu Picchu. Her parents’ poor health brought her back to Portland. She began working for Providence St. Vincent, launching the Visiting Nurse Department where she worked until her retirement. But she wasn’t done serving her community. 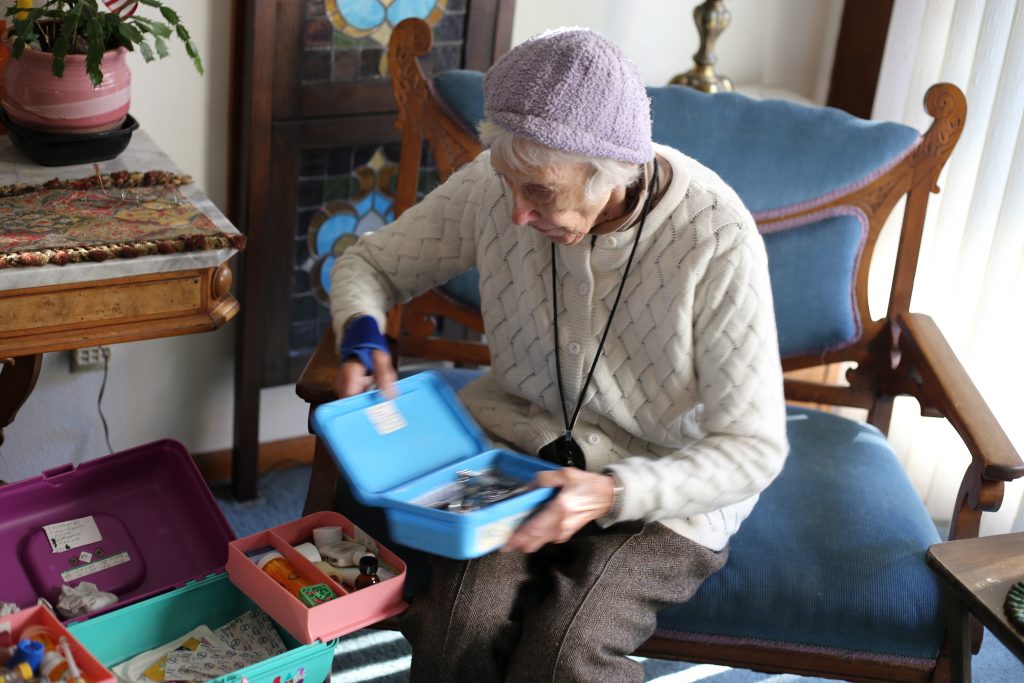 Mary Grace learned from her free clinic days that there was a great need to provide food to people but also foot care.

So began Mary Grace’s service to the homeless population of Portland by caring for their feet. She first offered her mobile foot care clinic at Saint André Bessette Church, then to Blanchet House and elsewhere. 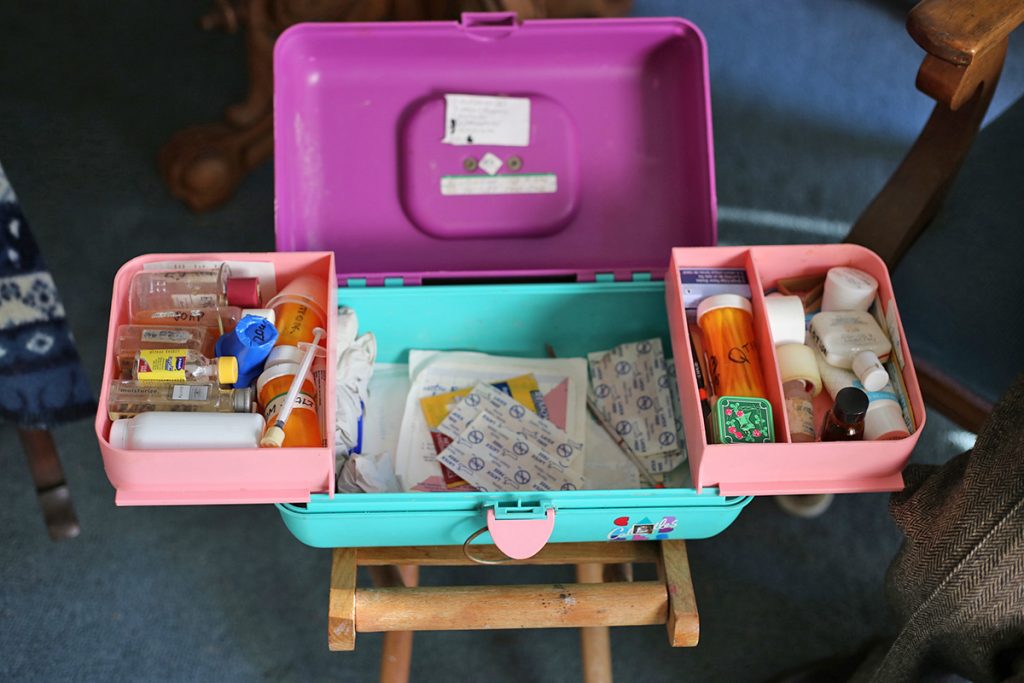 Bringing her own equipment, including wash bins, splints, nail care tools, and more, Mary Grace met a need many did not want to. She even brought her kit to people living under the Burnside Bridge. She saw feet that were abused and overused. She would splint broken toes, clean wounds, clip painful nails, and tend to them however she could. Once finished, she would help them select clean socks and find a pair of shoes that fit so they could stay healthy.

Though she’s now retired from volunteer and nursing work, Mary Grace still has her foot care kit in a brightly colored Caboodle. She took out each tool recounting how she used it.

“To do feet, first of all, you have to have your own equipment because none of those places have it. That means that I carried a stool with me, and I had my own case of instruments, and five washbasins where you could soak feet so that while you were setting up and getting the history of someone’s feet and problems, you could be getting the skin and the nails soft for the tools,” she explained. “Then I just started buying splints to straighten toes out. I started collecting stuff that I could cut cuticles and skin tabs with. The big things you needed hard, big scissors to cut the nails.”

Written by Teri Walters with Julie Showers. Teri is a junior at Portland State University where she’s double majoring in Political Science and Communications. She writes for PSU’s Vanguard and teaches skiing in her free time.

Contribute to Mary Grace’s legacy or make one of your own.