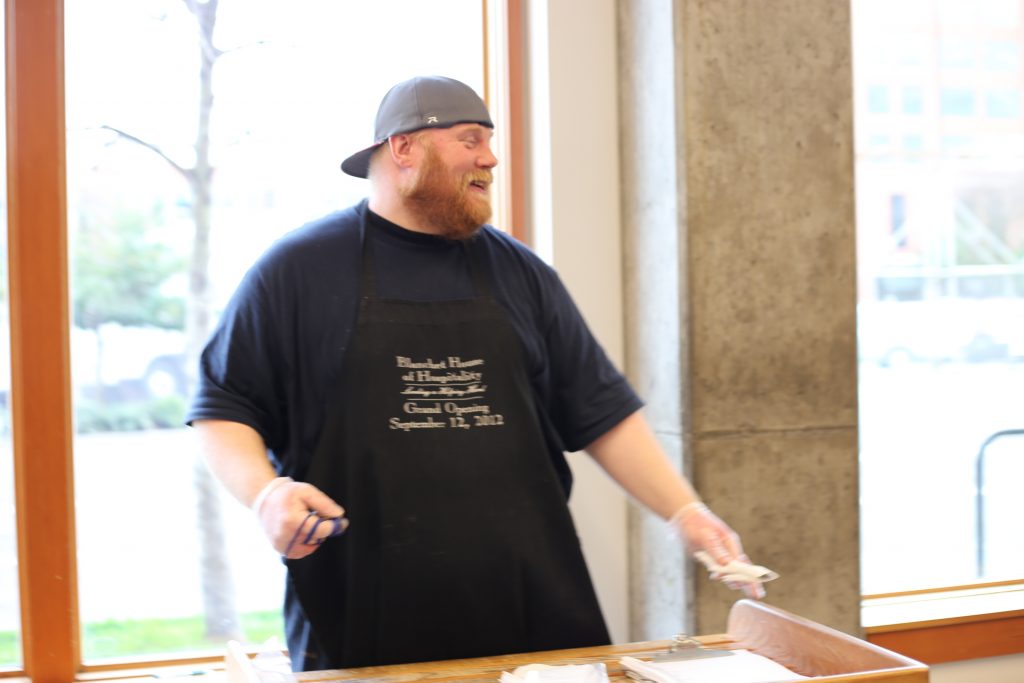 “A long time ago I didn’t have hope but now I do,” says departing and much loved Blanchet House resident, Jay Mac.

You may remember Jay as a superstar cafe host who was featured in a KGW television news segment with Joey Harrington in 2018. Jay gained recognition from the community for his compassionate and caring service. He came to live at Blanchet House after he lost his job running a food cart. He wasn’t able to make rent and found himself needing to make difficult choices.

“It’s the best decision I ever made. The amount of hopelessness this place saved me from is huge,” he says.

A long time ago I didn’t have hope, but now I do.

Jay slowly built himself back up by serving others in the safe and supportive environment of Blanchet House.

As a cafe host, he was a model of empathy for staff and residents. Jay welcomed all meals guests with a warm ‘hello’ and smile. He handed out blankets, shoes, and clothes when he could.

“I treat them like regular cause that’s who they are,” he says. “You never know what’s hidden under the layers of a person.”

Jay recounted how before coming to Blanchet he was always inches from living on the street because of his drinking. He credits the housing program with helping him rebuild his work ethic and giving him time to rebuild relationships with his ex-wife and children.

Since those early days, Jay has secured a full-time job at Jubitz he enjoys (of course he was an employee of the month within his first year there) and a rented room near his work. He’s moving out, which is bittersweet because we will miss him, but as usual he soothes us with a bit of lived wisdom to ease his exit.

“You can enjoy someone’s successes just as much as you can enjoy your own. Hearing about a guy moving into his own place after living on the streets for years, watching that weight come off him is the best feeling. Or finding a job that he wants, or when he’s getting sober,” Jay says.

The fourth floor of Banchet House is meant to give men who completed the initial nine-month program continued support. The additional months of free room and board put residents like Jay in a really good position because they have time to save money and build sobriety.

“I’m in a really good place mentally and physically. I’m just going to keep doing what I’m doing,” he says.

You can support a man’s chances of building a new life by donating to Blanchet House. We are a 100% donor-supported nonprofit. We need your help to continue to provide life-saving transitional housing and meals to those in need.