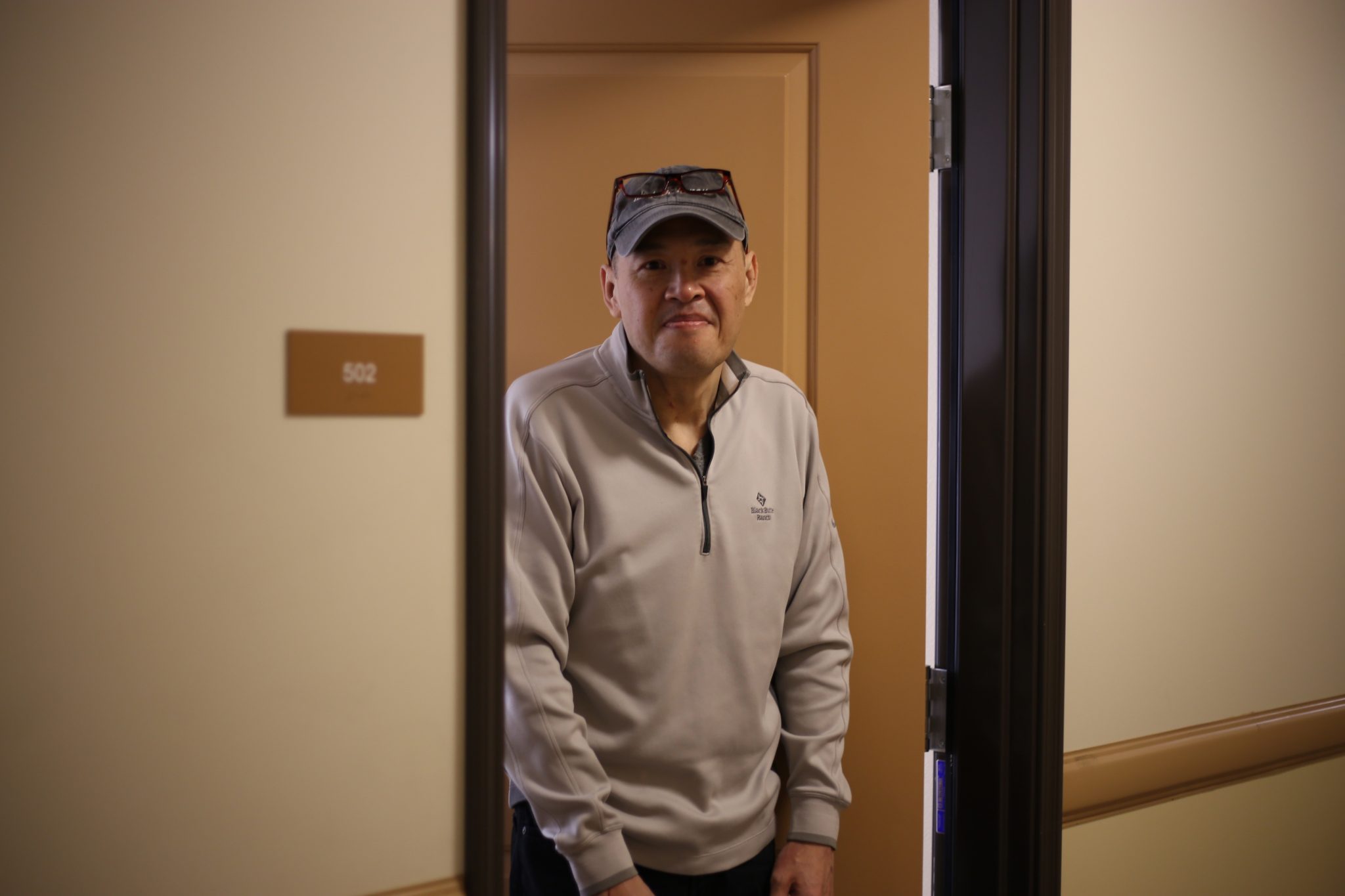 David Kok stands in the doorway of his apartment at MacDonald West in downtown Portland.

For Some Blanchet House is the Last Chance at Life

There aren’t many places for a man to go when he’s chronically ill, broke, and alone.

After 16 years of working as a registered nurse, David Kok, 58, couldn’t even get an entry-level job at McDonald’s. Mistakes had been made. Some mistakes are easy to bounce back from, but David’s mistakes had led to unemployment, family estrangement, illness, and eventually homelessness.

“I had no idea how difficult life can be,” David says looking back. “I did wrong. I admitted it. I paid for it. I never realized in our society some people don’t get redemption.”

In 2010, David pled guilty to felony criminal mistreatment and took a plea deal. As a result, he lost his nursing license, spent 60 days in jail, and three years on probation.

Though he has two bachelor’s degrees and a master’s, no one would hire someone with a felony record. He found work doing hourly labor and was living paycheck to paycheck–but he grew depressed and suicidal.

Prison Would Be Easier

“Looking back, l should have taken the five to 10 years of prison time,” he says. “At least then l would have had a bed, meals, and healthcare.”

A bit of luck found David, he secured a job as a live-in caregiver for a man with Alzheimer’s. The family knew his background and they felt compelled to give him a chance. It was a great job where he could use his nursing skills again. He felt fulfilled. After a couple of years of deterioration, the client had to be admitted to a long-term care facility. David was out of work again.

“I had a little money for rent and food. l was depressed, unable to cope, losing hope again. I became addicted to gambling,” he recalls.

A concerned friend took David to Providence St. Vincent Medical Center for a psychiatric evaluation. David was surprised to be admitted for three days. A counselor at the hospital called Blanchet House Case Manager Kristi Katzke to find out if David qualifies to live there. He was unable to find work or pay rent. He needed a support system. 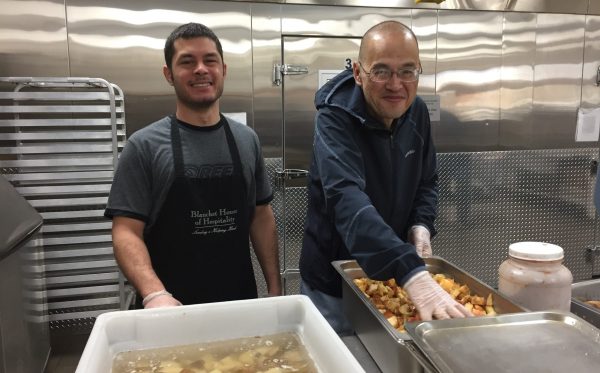 David working in the kitchen of Blanchet House.

Finally, a Place to Reset

Upon arriving at Blanchet House, David worked hard in the kitchen. It was apparent to the staff that he was not well. He had struggled his whole life with diabetes but this time it was obvious something else was going on. After visiting a doctor, he was diagnosed with autonomic dysfunction. He was gravely ill.

David stayed in his shared room while recovering. But his health problems began to multiply. He needed cataract eye surgery, five stents for heart problems, and neck surgery after taking a fall.

“I spent 62 days off and on at my second home–Good Samaritan Hospital,” David said.

The typical stay for a Blanchet House shelter participant is eight to 12 months. David, however, was seriously ill with nowhere to go other than the street, where he would surely die. People without money or family who need a moderate amount of care like cooking and laundry have nowhere to go to in Oregon. Blanchet House and a few other programs like it are the only places willing to take someone like David in.

“He wasn’t healthy enough to live on his own because he needs a support system,” Katzke says. “One place would say ‘his needs aren’t high enough’ for us or another place wouldn’t have any support at all so we wondered ‘what happens if he falls down and there’s no one there to help?” 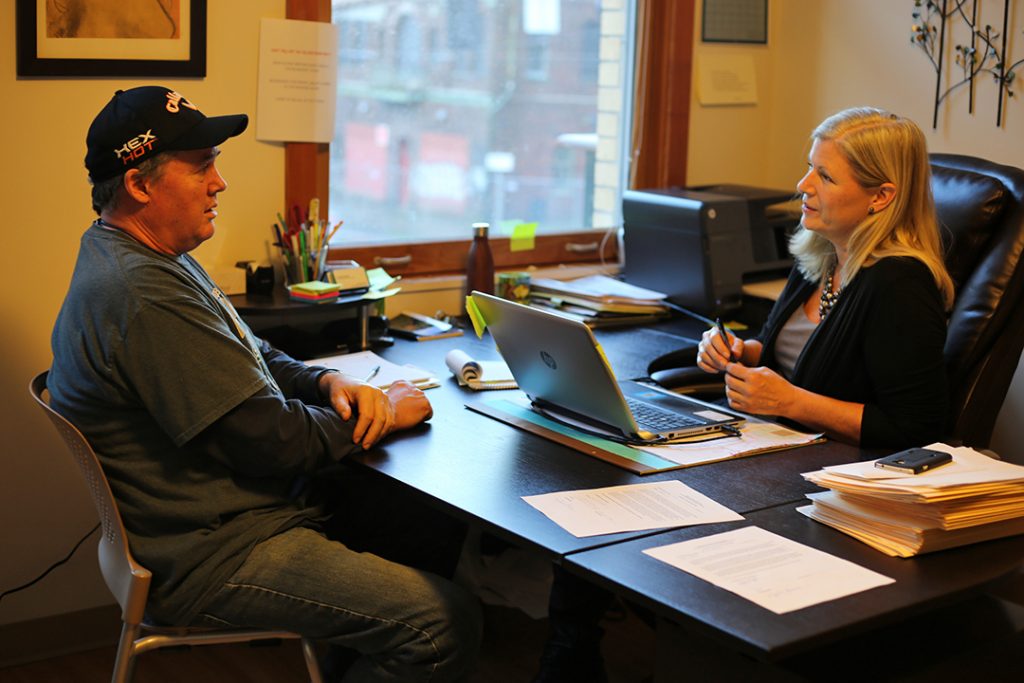 With Katzke’s professional guidance David was able to apply and receive social security to pay rent on a future apartment. Finding an affordable apartment is not easy for anyone let alone someone who has lapses in employment and housing. After a year-long wait on a list for semi-supportive housing, David is finally moving out. A rollercoaster ride of diminished hopes finally lead him to a subsidized apartment at the MacDonald West building operated by Maybelle Community Center. He’ll leave with his bed, bedding, and a dresser.

“I am thankful and grateful for this house of God, of hope, and yes, house of caring and LOVE. I feel blessed. In my two-plus years, l have seen guys come and go. I’ve seen them come back too. I pray for them all. God bless and thank you to all of you, our volunteers, and donors, who make the Blanchet House possible.”