After 18 years of wrongful imprisonment, Danté Farmer is free to create his future. Without any physical barriers, the Portland native is finding personal success working as Blanchet House’s assistant cook, an expert gang witness, and a minister.

When released from prison, his attorneys thought Blanchet House would be a good transition to become acclimated to city life again. He says living and working at Blanchet House provides a lot of necessary structure to reach his goals.

“I know there was a lot of concern, for a person imprisoned at a young age and then released as an adult, not knowing how they were going to transition their mindset,” Farmer says. “For me, it was less difficult because my mindset wasn’t in a prison mentality.”

“I’m using the experiences of everything that I went through for the positive now,” he continues. “I’m taking responsibility and ownership for how I was in the past. It’s easy to see how a person can bump his head along the way.”

Growing up in North Portland Crip territory there were many places to “bump his head,” according to Danté.

He grew up on the streets, moving in and out of group homes. He describes a personal dispute between himself and a grade-school rival as a key factor in getting involved with gangs, a choice that altered his life permanently.

When Danté was 18, he was sentenced to 25 to life for a crime he didn’t commit. It took 18 years to get the conviction reversed, and his release issued.

In 2017, a member of Kate Brown’s general counsel attended a prison event to speak about clemency. A coworker in attendance then connected Danté to Lewis and Clark’s law school’s Criminal Reform Clinic, organized by Professor Aliza Kaplan. The clinic hadn’t started yet; his letter was the first they received. The team signed on, and when the decision was unanimously reversed, they went for a new trial. The case ultimately went to the state Supreme Court. After spending his entire adult life in Oregon State Penitentiary, he was released two months ago.

“You can definitely get discouraged, especially when going through the legal process. You need drive and determination to weave your way through it. That was always my focus. I never got comfortable [in prison]. I was content to make the best out of a difficult situation, but I was never comfortable with doing time, and I was going to come up out of there one way or another.” 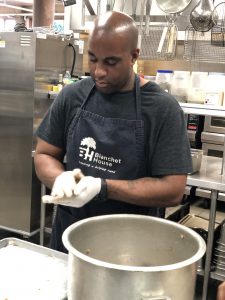 In those 18 years of incarceration, Danté learned how to advocate for himself.

“I always worked in the kitchen, I always had a strong work ethic,” he says “The ministry came later, but my faith kept me occupied as well. I also spent my time fighting my own case, I did my own research.”

Click here to watch a video of Dante playing the piano.

“I knew the life,” he says. “I want to reach out to others using my particular experience in any way that I can.”

Shortly after this interview, Danté will be leaving Blanchet House to live with his family. He secured a part-time position as a pastor at a local church. His short stay at Blanchet House gave him a transition into the world outside of prison as an adult.

“Getting out, I wanted to come into my own, but I know if I need help, I don’t have to hesitate to ask for it,” he says. “My experiences provide me with a strong backbone, to fend for myself.”

You can help men like Dante rebuild their lives by donating to Blanchet House. Our programs are free because of generous donors like you.  Join Partners for Plates, a $10 a month donor program. Learn more here.