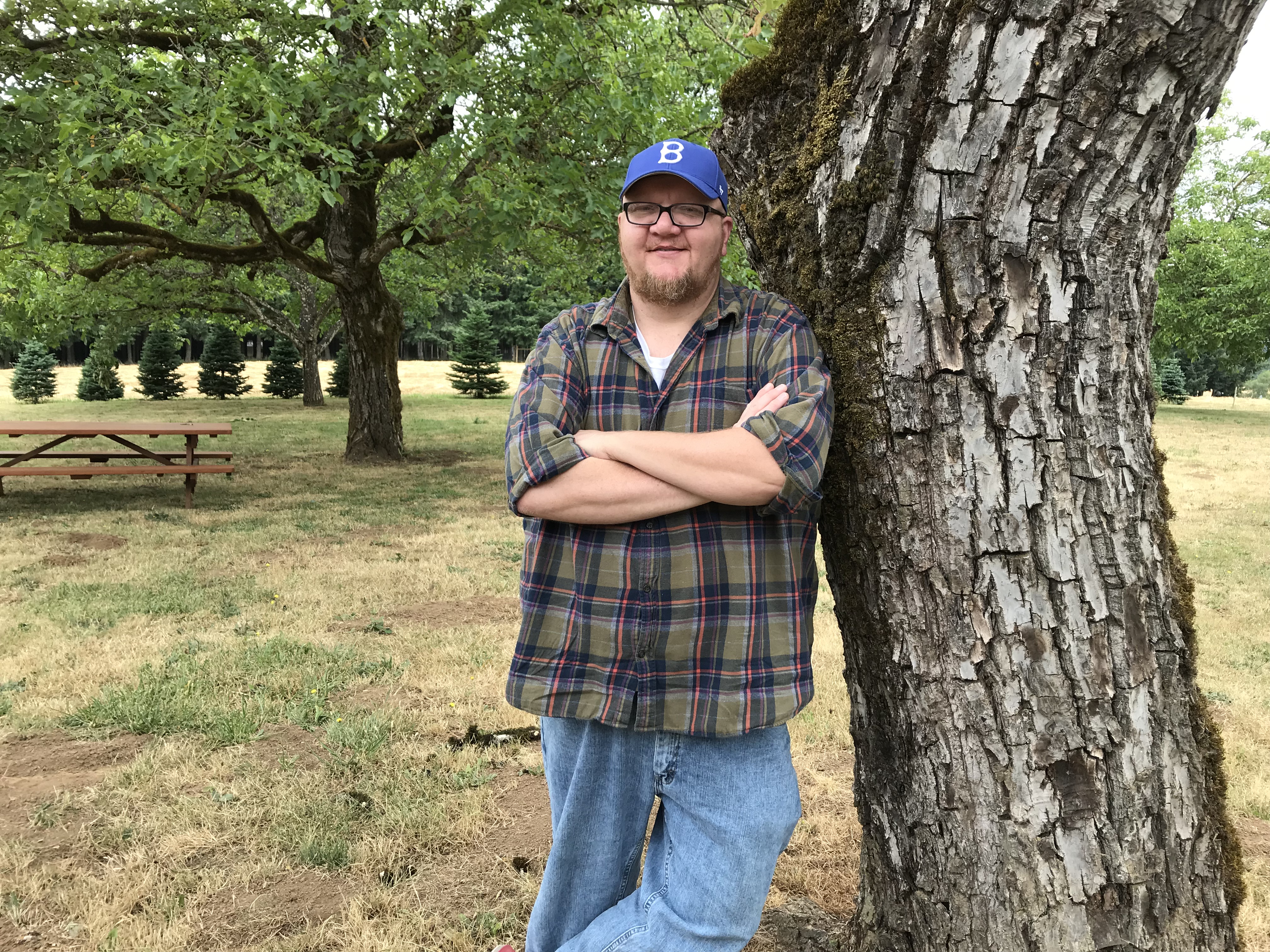 Brian B. grew up in what he calls the “armpit of California”— the Mojave Desert region. It was an economically depressed area and there weren’t many job opportunities which resulted in the prevalence of crime, drugs and gangs.

“I had my first gun pulled on me when I was 15,” Brian said over coffee at Blanchet Farm where he currently resides. “My parents couldn’t afford to move.”

As a child, Brian suffered physical abuse at the hands of his father. “He did as good a job as he could given what he was given,” Brian said. “I didn’t get it as bad as he had.”

Still, Brian manages to empathize with his father.

“[Meth] was my Kryptonite and complete undoing. Within a month I lost my job as a sales rep for a marketing company. I was doing really well too.”

“One of my earliest memories is of washing the car with my dad at age 4 and me not doing it right and he back handing me across the driveway,” Brian said. “I didn’t understand why I made him so angry. In my teenage years I became extremely rebellious. That’s when I started drinking and doing drugs. The only thing that saved me then was becoming a teenage father. I had my twins at 17.”

Last year, Brian and his wife divorced after 20 years of marriage.

“That rocked my world,” he said. “We just grew apart. At that point in my marriage I had been clean and sober, no caffeine, no nicotine even, for over nine years.”

After the divorce he started drinking heavily and smoking pot to escape the pain and loneliness. He made new friends who were into alcohol and drugs. A new girlfriend introduced him to meth.

“That was my Kryptonite and complete undoing. Within a month I lost my job as a sales rep for a marketing company. I was doing really well too,” Brian recalled.

Meth made Brian feel good. It gave him a feeling of euphoria and confidence which brought relief from the cycle of mania and depression caused by his Bipolar II disorder and divorce.

“There was definitely a self-medicating aspect to doing methamphetamine,” he said. “I ended up destroying my life though. I lost my apartment and pretty much all of my physical possessions. I ended up becoming homeless. I was couch surfing or sleeping in the park for about 8 or 9 months. I was doing meth as often as I could.”

Brian finally got to a point of desperation. He walked about five miles to the Beaverton public library to use the computer.

He messaged a friend who he had stayed with once before. He wrote, “I’m sleeping in a park. I need help.”

“The last thing I wanted to do was end up on a farm in some place called Carlton in August. I didn’t want to die so where else was I going to go?”

The library was closing and he didn’t have time to figure out a plan with the friend. He thought, “Okay, I’ll be alright one more night.”

He left the library and laid down in the grass near the front doors and went to sleep. Unbeknownst to Brian, his friend reached out to a mutual friend and let them know the situation. About an hour later Brian opened his eyes to see his friend Richard. He took Brian to a friend’s house to stay. They called another friend in Salem who generously took a day off of work to come up to try to help Brian in some way.

His friend from Salem said, “Here’s your situation. You’re looking at being institutionalized, put in prison or dying. We have to get you treatment.”

Brian’s head was swimming. The friend knew someone in recovery staying at a place called Blanchet Farm. They got the number the farm, called the manager, Ross, and made an appointment to come the next morning.

That was almost a year ago.

“The last thing I wanted to do was end up on a farm in some place called Carlton in August,” Brian said. “I didn’t want to die so where else was I going to go?” 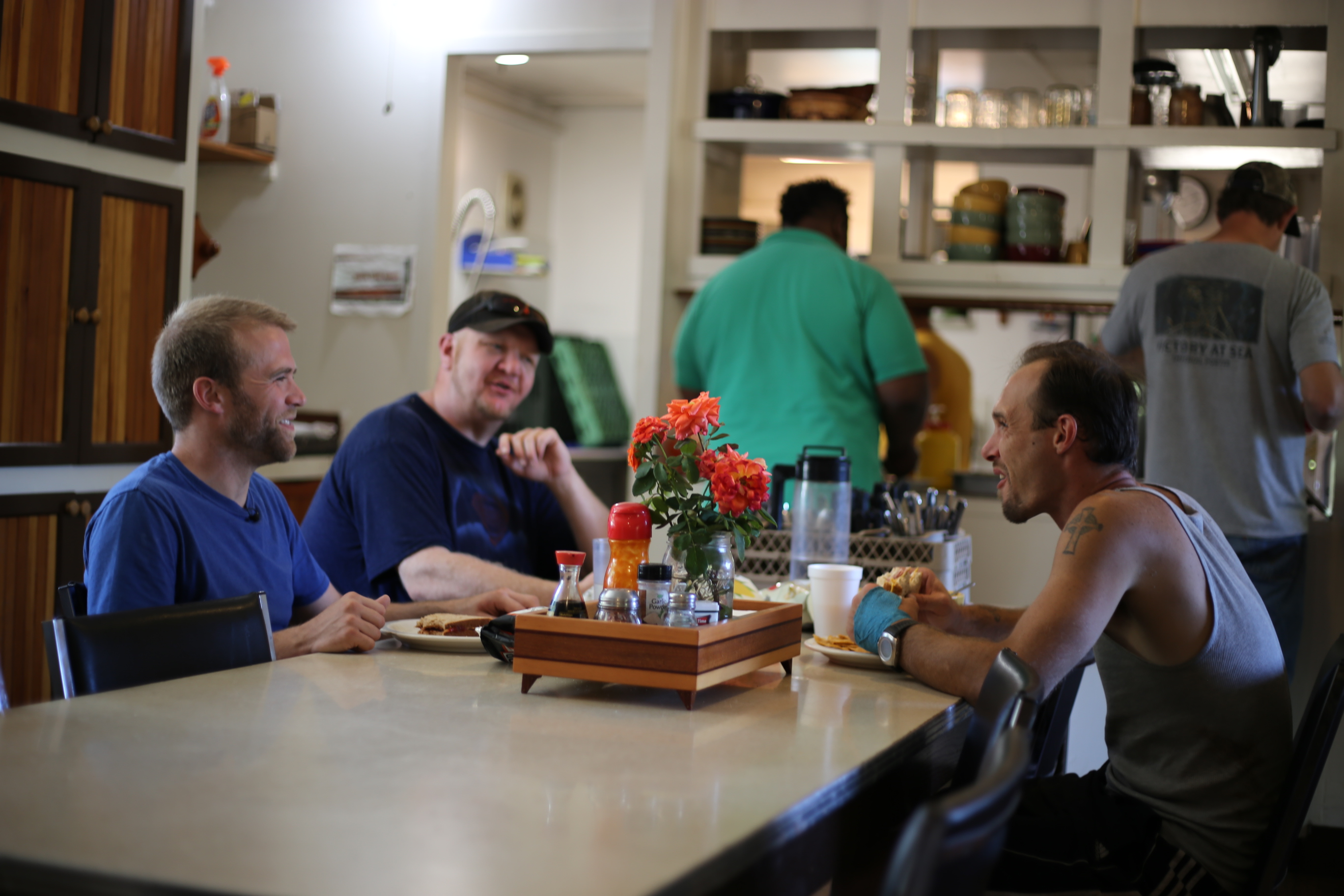 Brian eats lunch with peers in recovery at Blanchet Farm.

The day before Brian arrived at the farm he used his friend’s phone to call his ex-wife. To his surprise and elation she was extremely supportive of his decision to get treatment.

“I said here’s why you and the girls haven’t heard from me in five months,” he remembered. “My sudden absence created huge problems for my [three] daughters. They didn’t know if I was dead or had abandoned them. Especially my youngest, who was 11 at the time of our divorce. It affected her the most.”

Brian had a choice to make once arriving at the farm. He could live in fear or do what he needed to do for my recovery, which was be vulnerable.

“I’m dead serious when I tell you this. If I weren’t here, I don’t think I’d be alive right now. I’m just being honest,” he said.

“I’m dead serious when I tell you this. If I weren’t here, I don’t think I’d be alive right now. I’m just being honest.”

“Knowing who I am, I don’t see how I would have not relapsed if I’d gone somewhere else,” Brian said.

What’s so special about the farm? For Brian, “above and beyond everything else is the peer support. It is simultaneously the biggest thing I needed and the hardest thing to do. I walked in here with no interest in talking to other men. Given my experience I had no reason to trust them.”

When he arrived at the farm there were many residents with a lot of recovery time under their belts. Now that they have moved on, Brian is the most senior resident.

He enjoys the role of mentor. “I enjoy being able to have very honest conversations with the new guys,” he said. “We’re here to lean on to each other.”

His first 90 days of sobriety at the farm was very difficult.

“I was so angry and frustrated with myself,” he said. “Here I am feeling all this pain from my addiction and what does my brain tell me to do? Go out and use! To be around guys saying, ‘You’re not alone. This is normal. You’re going to be okay.’ It’s so important to recovery. These guys knew I needed that because they’ve gone through it.”

“Learning to be vulnerable with a bunch of dudes was hard and it still is hard,” Brian said. “But in doing so, even just sharing that, for them to be able to see that I’m a passionate man, I’ve already cried a couple times. These guys have all seen me cry. I let it be known. If you don’t want to see my cry then don’t look. I know from their words that a lot of the guys have been able to be more open and vulnerable because of me.”

Now when Brian is at NA and AA meetings, which are held at the farm, he uses his experiences to show others that recovery is possible.

“I’ve learned to appreciate taking coin [sobriety coins are given for specified lengths of sobriety]. When someone takes coin ahead of me they are lighting the path for me,” he said. “They are showing me that there is a way and that the program works. It gives me hope. If you’re behind me, you are reminding me of what it felt like. Let me tell you how that felt like for me so you don’t feel alone and crazy.” 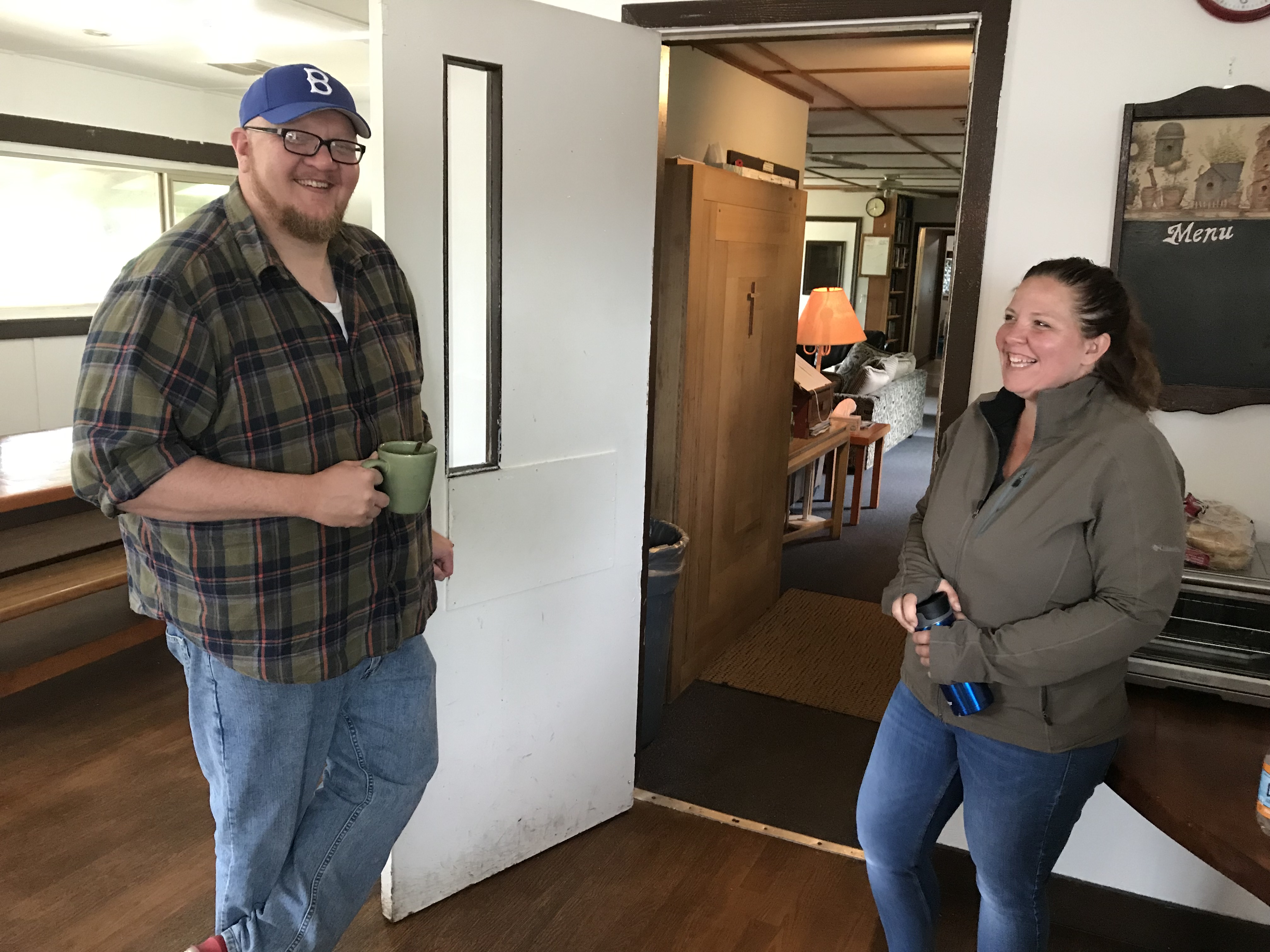 Brian’s ex-wife has been a huge advocate for him since coming to the farm. She calls to update him on their daughters’ lives.

Nearly a year after coming to the farm, Brian’s daughter Cecilia, asked him to attend her high school graduation. He wasn’t sure how his youngest daughter would feel about seeing him there. He was worried about the reunion being overly emotional.

“I want to live. I don’t want to die. I want my kids in my life so I must heal. I want recovery.”

They decided as a family to meet up at a Starbucks the week prior to graduation. “It was awesome,” Brian said. “We talked for an hour and a half.”

His oldest daughters just needed to hear him say, “I’m okay,” he said. That was good for them. His wife told him that their youngest daughter wasn’t ready to see him yet. She was walking her own path of healing.

A week later, he sat by himself at the graduation. He cheered loudly for his daughter as she accepted her diploma. After the ceremony, he found her in the crowd and told her how proud he was of her.

Despite the stress in her life she made the honor roll. Unbeknownst to him his youngest daughter walked up behind him and gave him a hug.

“We’ve been talking and texting ever since,” Brian said through tears of joy. “It is awesome. They came to farm to watch the World Cup. I took them on a tour. They saw the animals.”

Brian credits his sponsor with showing him how to make amends. “You’re living your amends. Everything you’re doing in your recovery is your amends,” his sponsor said.

Brian will now let the people he hurt know that he is sorry and explain that he is working to be better.

“I want my kids in my life so I must heal. I want to recover,” he said.

In March, Brian started working through a temp agency off the farm in Newberg. He plans to exit the residential program in three to four weeks. He plans on coming back to visit and stay plugged in to the community here.

Help a man like Brian rebuild his life and family by donating to Blanchet Farm. Donate here.